Home>Technology>5 Things To Know About the Ending of Geiger 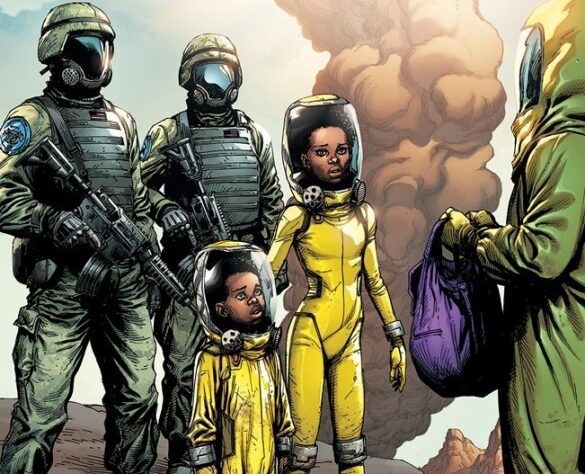 The first story arc of the Image Comics series Geiger has ended. Throughout these six issues, readers have met Tariq Geiger, his allies, his new enemies, and the post-apocalyptic world they all live in. This final issue, slightly longer than the rest of them, has a sizable amount of content for readers to examine. Spoilers for the story ahead.

After Tariq’s battle against the military’s android, Junkyard Joe, one of the rods that kept him stabilized breaks. Barely controlling the radiation inside his body, he keeps Hailee, Henry and even Barney away from him as he unleashes it all against The King and his army. This massive blast obliterates the remains of Boulder City. However, as the stranger from the future notes, he is still alive. Creators Geoff Johns and Gary Frank still have plans for this character.

2. The New Family Is Safe

Tariq sends the siblings and Barney to a safe location in Copper Canyon, Mexico, where they are welcomed by Nurse Red, a character who almost kills him on sight, which implies they have a past together. He does this to keep them away from his apparent death, which upsets them since they became a new family to him. But Henry is not entirely safe, since the previous issue reveals he has cancer.

3. The Future Stranger Is Revealed

By this point, it is clear that the hazmat-clad stranger who explores the crater that was once Boulder City and tells the story of Geiger is an older Rick, the boy from Norad who helps Hailee and Henry, at the expense of his eye and his health. He is telling the story to another stranger with him. Considering he knows more details that he could have known when he first meets everyone, there is a chance he will reunite with the siblings again.

Following Tariq’s battle against the US military, the general, acting under the orders of President Griffin, strikes a deal with the biggest warlords of Las Vegas: Safari Bob, Goldbeard, Bonnie Borden, Milky Way, Mr. Karloff and Nero. Joining them is The Queen, who is the mother of The King and ready to make amends after her son’s death. The crime bosses want control of the west and are ready to turn in Tariq to the government in return.

5. The World Is Bigger Than Expected

The revelation that cartoon character Junkyard Joe is a real android who serves the military shows that Tariq is not the only abnormal being in this world. Rick mentions that there are other extraordinary heroes such as the immortal Redcoat from the American Revolution or The Monster from World War II. They are known as The Unnamed and they are protagonists of several comics, starting with Joe. A giant-sized issue of Geiger that comes out in November expands on characters such as Tariq, Barney, Goldbeard, Borden and others.

The ending of this series concludes the main story while opening possibilities for more. Readers can look forward to massive expansions to Tariq’s world in comics beyond this series.